I am not coordinated.  I fall while running, while walking, while going up stairs, you name the activity and I’ll find a way to injure myself.  My daughter’s name means “one who walks with a strong proud gait.”  It is my hope that by bestowing such a name on her she will be more graceful than her poor mom.  But I digress…

My husband wants to do a long bike ride for his upcoming 40th birthday and was sweet enough to buy me a nice mountain bike so that I could join him.  The first time I took it out I crashed within 15 minutes.  Today I rode with my husband in lieu of doing my long run.  We were on a beautiful trail in the mountains in McCall, Idaho.  I don’t think this trail would be considered difficult or technical by any standards.  Nice and wide with some ruts, not too steep.  About three miles in I somehow popped my chain off of the gears and got it stuck.  While my husband was patiently trying to fix my bike for me, I was repeating to myself, “This moment is exactly as it should be. This moment is exactly as it should be.”  But although my head was saying that and my eyes were looking around and trying to appreciate the beautiful scenery and the peace and quiet of being along in the mountains with my husband, my heart was screaming the following:

“This moment is NOT as it should be!  I should be on a long run!  Or with my running team at the Famous Potato Races trying to get a PR! What is wrong with me? Why am I always injured? I don’t like mountain biking.  I should sell this bike.”  I almost burst into tears.

But I got back on my bike. Repeating, “This moment is exactly how it should be.”  My encouraging husband kept telling me what a great job I was doing even though he had to slow his pace and frequently wait for me while I walked my bike around ruts that I was too timid to ride around.  I felt like my heart rate was getting higher more from the adrenaline pumping through my body due to my fear of crashing rather than anything my legs were doing to power me up the hills.  My hands were getting tired from white knuckling the handlebars.  I knew there was so much beauty around me, yet I was afraid if I took my eyes off of the trail in front of me, I would miss a rut, rock, or stick and crash.  At one point my husband asked me if I was having fun and I just smiled.  Fear and frustration had been the more dominant emotions, and I didn’t want to lie.  As I rode along I thought also about a passage I read earlier this week in a book called “How Champions Think” by Bob Rotella.  In it he says that “Failure is only final when you stop striving.”

As my husband and I got to our halfway point and turned around, the most amazing thing happened.  I started to relax and bike a little faster.  I was able to take my eyes off the bike for long enough to enjoy the amazing views around me.  I was able to chat with my husband some and enjoy his company.  A luxury that we don’t get very often with three small kids in the house!  I was actually enjoying myself and having fun!  I returned home from that ride happy, refreshed and with a feeling of accomplishment.  And when I got on the bike again a couple of hours later to ride with my kids I realized that my legs had gotten much more of a workout than I thought. 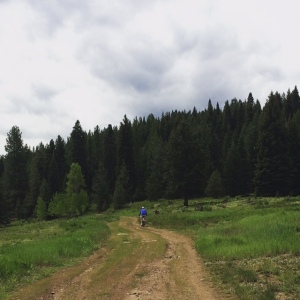 Trying to keep up!